The money is divided equally between the two groups, and each plans to create six murals. The grant funds can be used to compensate the artists as well as for art supplies and anything directly related to the project.

The Mural Arts Institute, an arm of Mural Arts Philadelphia, awards this chunk of money to only three grantees in the country for an extensive project that spans two years. (It’s the nation’s largest public art program, according to its website.) 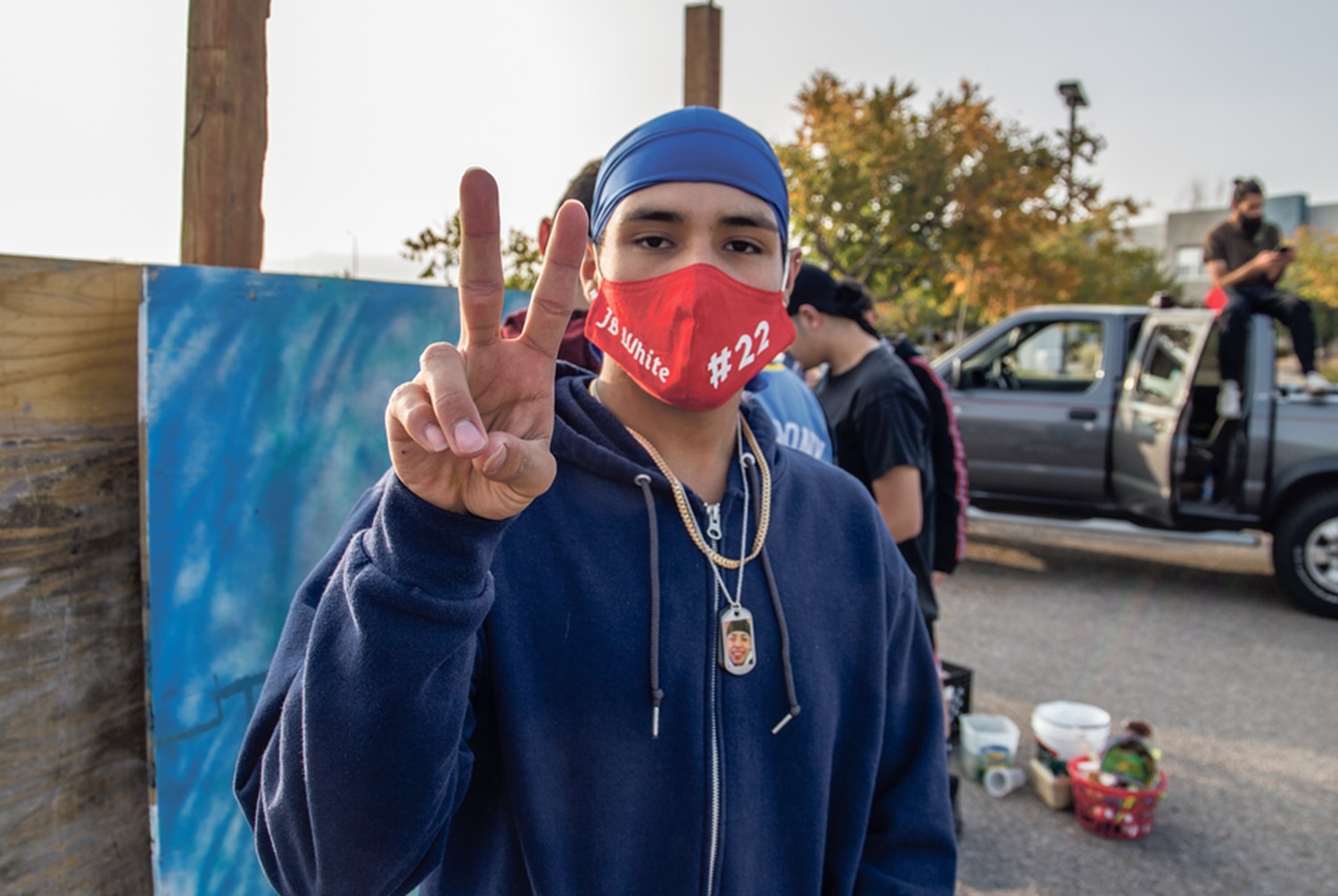 The portable mural, intended to stand in Swan Park on the Southside, is a collaboration between multiple organizations: Alas de Agua Art Collective, Gerard’s House and the Santa Fe Public Schools’ restorative justice program. The project is meant to bring together a community broken from the loss of multiple lives to violence. 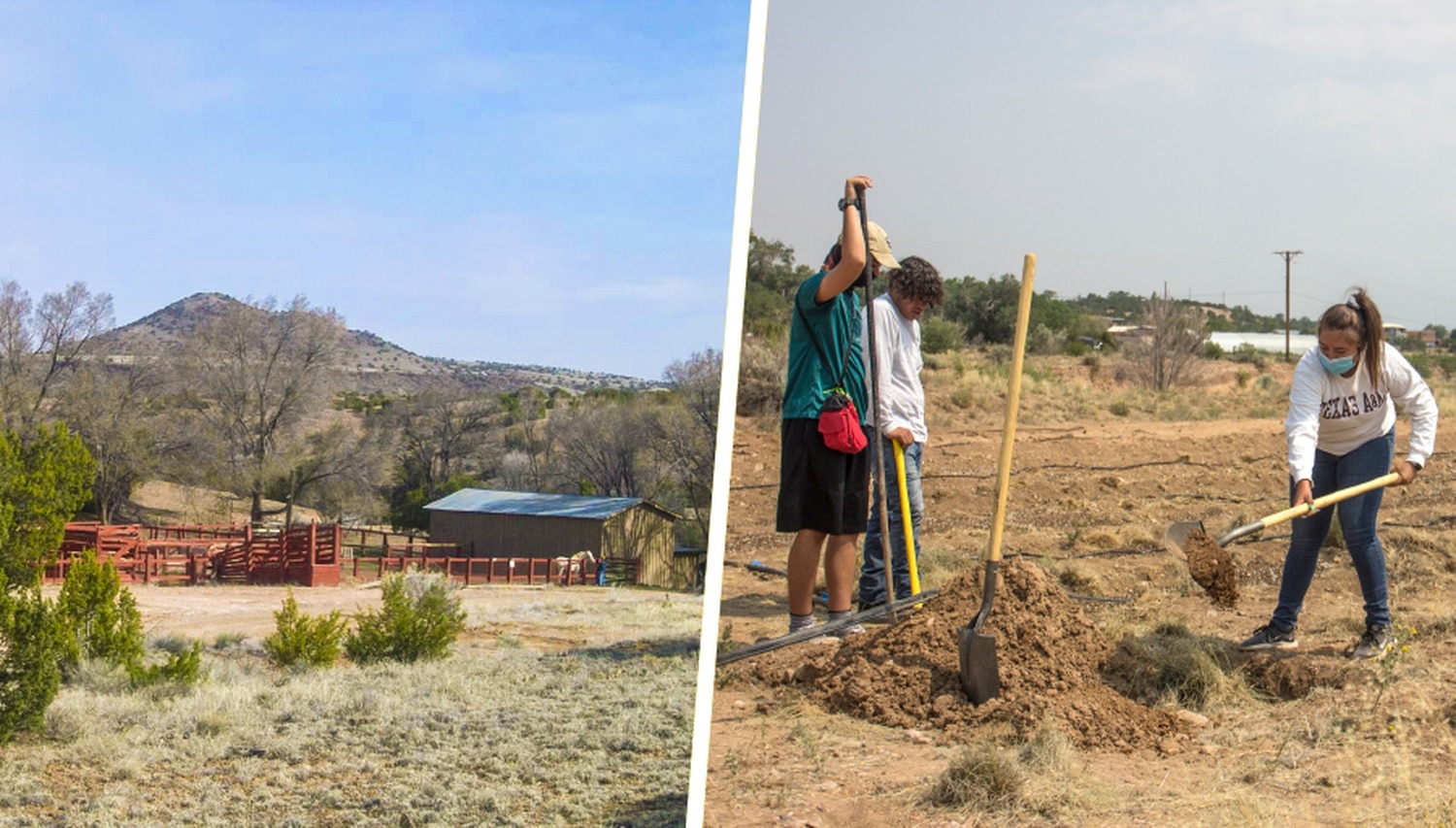 Hundreds of acres of county-owned woodland and pasture in La Cienega have sat idle—until now.

A group of nonprofits are working together to grow food on a small plot at La Bajada Ranch, the first time the land has been put to use since Santa Fe County purchased it in 2009. The nonprofits plan to use existing food distribution programs in the city as well as send future vegetables to Nambe and Pojoaque and other places identified by the Santa Fe Food Policy Council as without access to enough fresh food.

“We want to create multilayered, intergenerational, intersectional healing along with being able to provide sustainable farm lands with closed loops that help our community,” says Israel Francisco Haros Lopez, one of the founders of the Alas de Agua Art Collective, a nonprofit that is part of the farming project. “Currently we are looking for more funding sources and hoping this is just the beginning of bigger collaborations with the county and other landowners. This is the beginning of projects that we hope will help locally on many levels.” 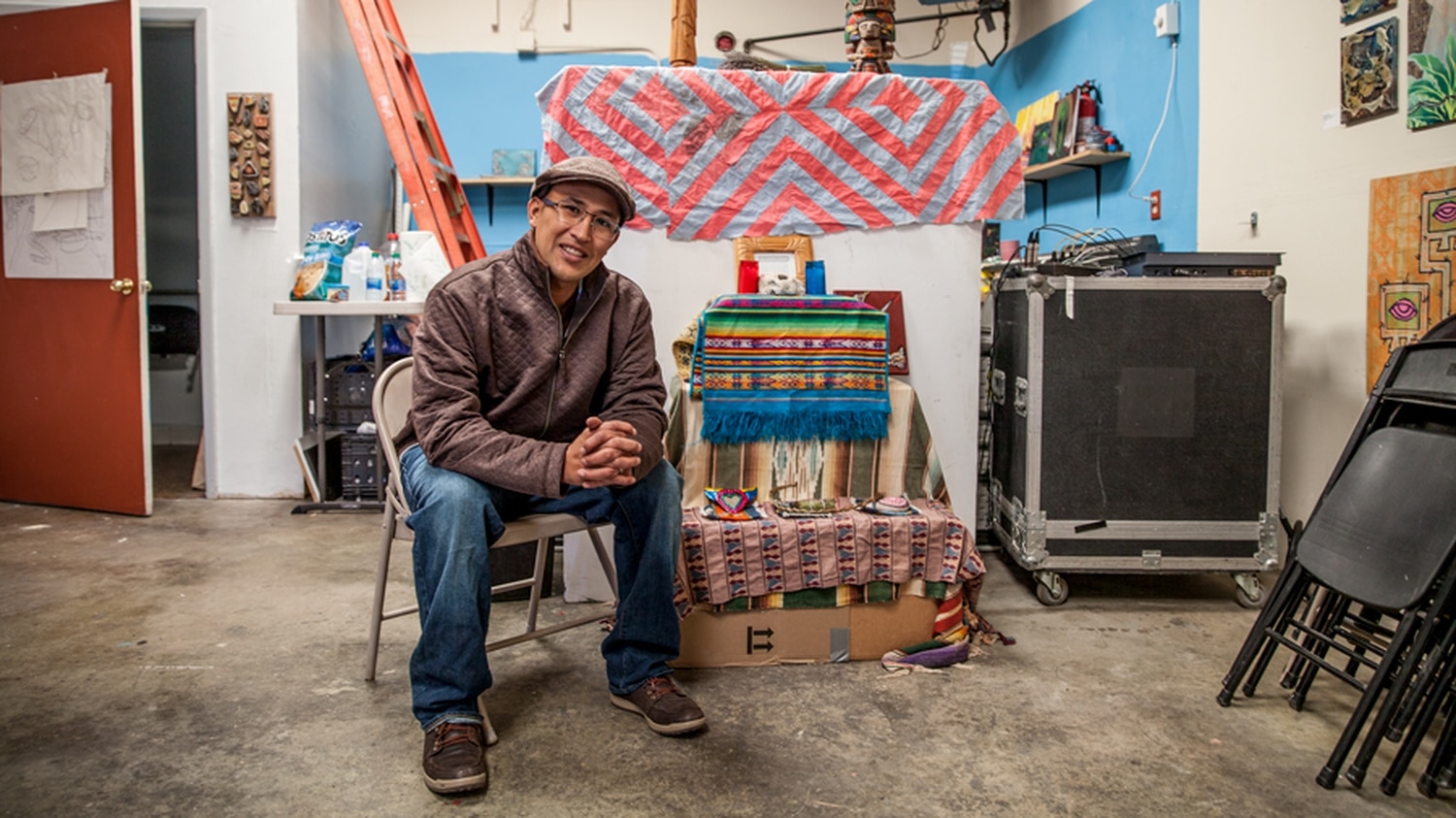 Everyone with a memory of it says it’s plenty likely that the heist, pulled off just after 5 pm on April 27, 2004, amounted to one of the largest bank robberies in New Mexico history.

The FBI quickly figured out that Granillo and Naranjo were in on the robbery. After agents arrested the couple on April 30, 2004, Granillo would not see the New Mexico sky as a free man again until a decade later.

He spent the entirety of his 20s in federal prison.

Now 36, Granillo sits in his sunny kitchen in Santa Fe surrounded by paint bottles, several half-finished canvases, his kids’ toys and a massive stack of papers and photos—the discovery from his court case for the bank job.

“I have to work on being a good human every day and actually talk to myself to say, ‘Hey, this is what you have to be,'” Granillo tells SFR. “Do the math. I was 30-something. To come out [of prison] and to say ‘You’ve rehabilitated or just changed overnight’ would be ridiculous.”

Seven years after he stepped out of prison, Granillo has made an impact on Santa Fe’s Southside. He helped found the Alas de Agua Art Collective, set up art programs in local schools, got married and had his first child.

If the name Israel Francisco Haros Lopez looks familiar to you, it’s surely because SFR has been following the artist/writer/activist’s career for some time now with stars in our eyes. Haros Lopez is co-founder of the Alas de Agua Art Collective (1520 Center Drive #2, 660-9563), a nonprofit grant- (and blood, sweat and tears) funded entity that provides events, workshops, training, mural painting, poetry and so much more to the underserved denizens of Santa Fe’s Southside.

The Alebrijes of Nina Otero Just inside Nina Otero Community School, a group of students works on a paper mural, spread across the wall and held up by tape. They discuss next steps, loudly, as they bring to life their own versions of alebrijes, fantastical creatures first created in Mexico.

This mural, and two others in progress at Ortiz Middle School and Camino Real Academy, are part of the Visiting Artist Programs provided for local schools by ARTsmart, a nonprofit that supports art programming for youth in Northern New Mexico.

But this semester’s murals are just the beginning for Santa Fe’s Southside. Starting next year, ARTsmart will prioritize Title 1 and Southside schools for Visiting Artist Programs to address a gap in art options in Santa Fe.

After four years and change, Southside DIY arts and music warehouse space Zephyr Community Arts Studio is coming to an end. But from the sadness over losing a community-based venue, studio, art space and model for togetherness through artistry comes hope—the Alas de Agua Art Collective is taking over the lease at 1520 Center Drive #2 and will finally have a space all its own. 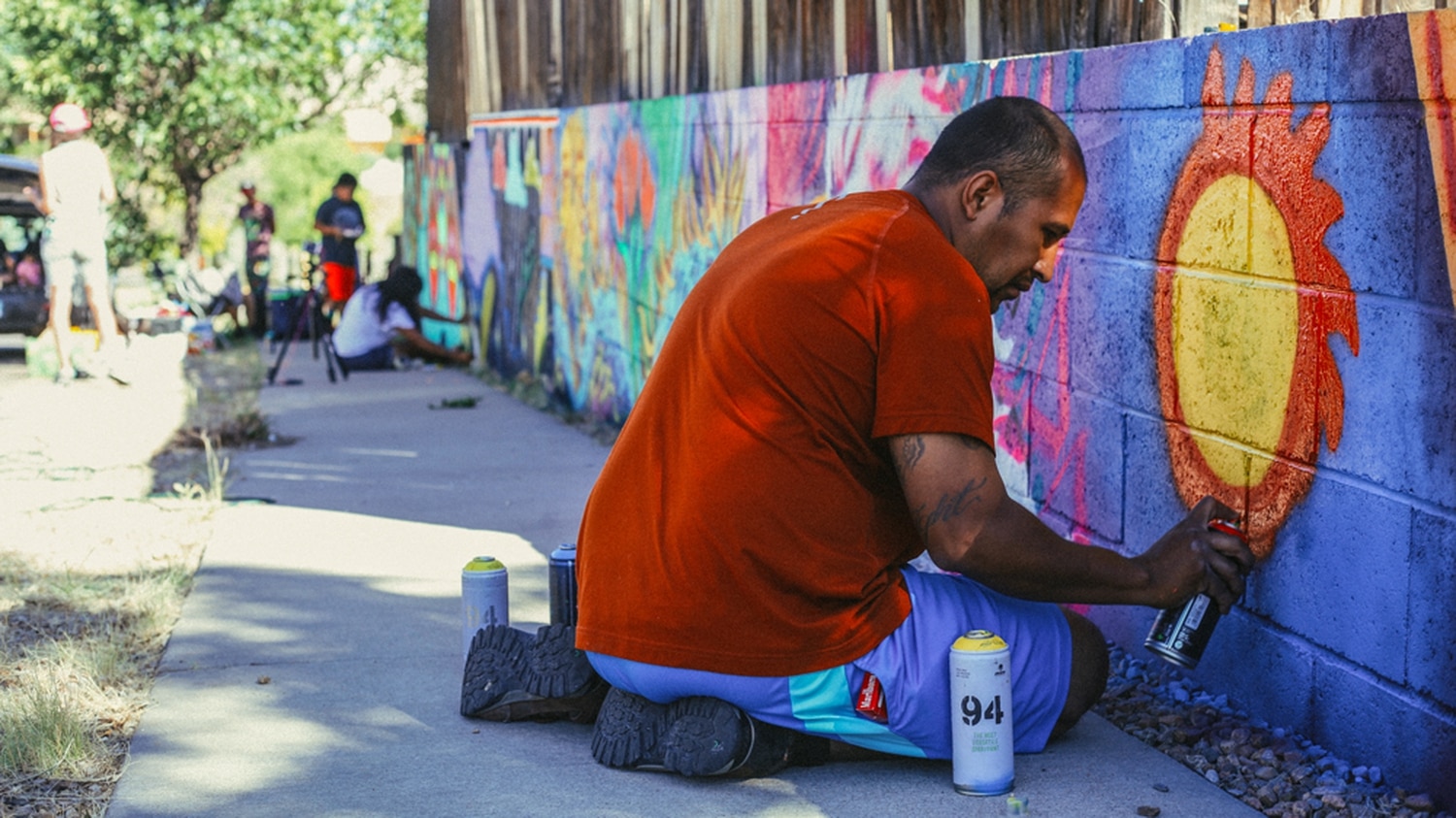 Over the course of the first week of July, an ancient story and thousands of years of rich culture and beliefs were transferred from the hearts and minds of three art collectives onto what used to be a nameless bit of concrete at 6085 Monte Verde Place.

“We’re focusing on borders and seeds, not just the literal seeds that you plant in the ground even though that’s something we want to focus on, the natural, but also the seeds that you’re planning in the community. When I get the kids out of Monte del Sol to come mentor with us, when we get the kids from probation or the kids that have issues or marginalized in a sense, we get them in here and we plant the seed, the idea that community wants you and community loves you,” Granillo says. “The eagle itself on the end is for women’s marginalized voices and the sky. The jaguar was the land. Then you have the path and then you have the sky for direction. Three different collectives working as one. You get a little bit of flavor from every single thing. But throughout all of our cultures we have a lot of the same iconography.”

Haros Lopez dreamed up a name for the collective that is as free-flowing as his vision for the group: Alas de Agua is Spanish for “wings of water.” Haros Lopez explains, “We’re teaching community members to be resilient and resourceful where there’s nothing but blockade borders. How do you do something just with Sharpies, or just with pencil and paper? How do you do something when you have total access to a gallery? It’s the whole spectrum.”

Our Town: Local artists explore the theme of Sanctuary

Israel Haros Lopez is the founder of New Mexico Mural Project, a collective of immigrant and native-born artists who work with area schoolchildren on public murals. With artists Juan Lira, John Paul Granillo, and José Chavez, Lopez is collaborating with some of his students in creating a mural offsite to be installed at the gallery. The work is on the theme of immigration and includes a large-scale depiction of Mother Earth that incorporates sacred geometry, something Lopez uses in his work as an illustrator. “In some ways this piece looks at all of our nature, as people who have migrated. It’s called Build That Wall, We Come From the Stars, We Come From the Center of the Earth,” he said.